Dow Jones futures jumped Monday morning, along with S&P 500 futures and Nasdaq futures. A powerful stock market rally has taken hold, fueled by election results despite surging coronavirus cases. The Dow Jones, S&P 500 index and Nasdaq composite had their best weeks since early April after their worst weeks since the March crash. Leading stocks are breaking out in droves.


Joe Biden won the presidential race, according to the Associated Press, CNN, ABC and CBS. While automatic recounts are likely in at least Pennsylvania and Georgia, with President Donald Trump pursuing legal challenges, the 2020 election appears to be over. But not for the Senate. The GOP looks set to hold 50 seats, but could cling to a majority if it wins at least one of two runoff races in Georgia on Jan. 5.

Investors should be looking at expanding exposure, as the new market rally gains momentum. Alibaba stock, Nvidia (NVDA), Google parent Alphabet (GOOGL) are still in range from proper buy points. Use the weekend to prepare for a key week.

Finally, solar and marijuana stocks such as First Solar (FSLR) and Aurora Cannabis (ACB) surged Monday, as investors continued to mull the election implications. A Biden administration would likely back decriminalizating pot while touting sweeping green energy plans.  But it’s unclear if a GOP Senate would go along with those policy shifts. Canadian cannabsi producer Tilray (TLRY) earnings are due late Monday.

With the 2020 election seemingly coming to a close at the presidential level, that provides further certainty. But investors appear to have priced in the likelihood of a Biden presidency and GOP Senate.

Remember that overnight action in Dow futures and elsewhere doesn’t necessarily translate into actual trading in the next regular stock market session.

Join IBD experts as they analyze actionable stocks in the stock market rally on IBD Live.

Texas has topped one million Covid-19 cases, with California likely to hit that mark by the end of the week. U.S. coronavirus deaths are picking up, but still well below their spring peaks.

Joe Biden will announce a 12-member coronavirus task force Monday to deal with the pandemic. Biden has meanwhile promised that he will ask Dr. Anthony Fauci, the infectious diseases expert who has clashed with President Trump, to stay on as Director of the National Institute of Allergy and Infectious Diseases.

European coronavirus cases continue to spiral higher, even as many countries have imposed partial lockdowns to counter the spread. France alone announced more than 86,000 cases on Saturday.

Pfizer (PFE) and BioNTech (BNTX) could announce interim efficacy data from their final-stage coronavirus trial any day, with a possible filing for FDA emergency approval late this month. Moderna (MRNA) could follow with its Covid vaccine candidate in December, with AstraZeneca (AZN) a few weeks later. Several other potential coronavirus vaccines are moving ahead in clinical trials.

The Dow Jones and S&P 500 index marked follow-through days on Wednesday, confirming the new stock market rally. On Thursday, the Nasdaq followed through.

Growth stocks had a tremendous week.

Nvidia shot up 16.2%, breaking out past a 574.04 cup-with-handle buy point, according to MarketSmith analysis. That’s after offering an early buy point on Wednesday. NVDA stock was Friday’s IBD Stock Of The Day.

Google stock “only” rose 8.9%, clearing a 1,726.20 buy point from a cup base. But that followed a slim 1% loss the prior week and a 4.2% gain before that, while most stocks were skidding lower in late October.

Alibaba stock fell 1.6% last week, but finished strong. Shares tumbled 8.3% on Tuesday as China suspended the blockbuster IPO for Ant Group, one-third owned by Alibaba. But BABA stock slashed losses, reclaiming its 50-day line and closing right on its 21-day exponential moving average, at 299.95. That also was back above Alibaba’s still-valid 299.10 buy point from a flat base that’s part of a base-on-base formation — actually a base-on-base-on-base.

The Xpeng P7 and BYD Han EV are both Model 3 rivals.

Xpeng earnings are due Thursday. Last week, Xpeng stock exploded for an 80% gain, vaulted past an IPO base. Li Auto, which broke out the prior week, leapt 31%. Nio stock spiked 36%. BYD stock, which trades over the counter in the U.S., ran up 25%, its sixth straight weekly gain.

By comparison, Tesla stock seemed stuck in the slow lane, but did leap 11% to 429.95 last week. Shares moved back above their 50-day and broke a short downtrend, so arguably that’s an early entry. But investors might want to wait for a little more power, especially with so many other growth stocks flashing so much strength. The official Tesla stock buy point is 466.

An FDA advisory panel on Friday harshly criticized the Biogen Alzheimer’s drug aducanumab. While the FDA doesn’t have to follow an advisory committee’s lead, the odds of the Biogen drug winning approval seem remote. That’s a huge shift from Wednesday, when FDA briefing documents played up the Alzheimer’s drug, sending Biogen stock up a whopping 44%. For the week, shares rose 30.5% to 328.90.

Biogen stock was halted all day Friday. It seems inevitable that BIIB stock will fall hard when it finally resumes trading. The only question is how far. Several analysts expected a Biogen stock drop to 250, or worse.

The Best Funds Are Scooping Up These Stocks

What a difference a week makes. At the end of October, the major indexes and leading stocks had been pulling back for weeks, undercutting their 50-day lines. The post-earnings sell-offs by Apple (AAPL), Amazon.com (AMZN) and Facebook (FB) on Oct. 30 were the final straw, capping the major indexes’ worst week since March and pushing the market into a correction.

Last week started off with decent gains on Monday and Tuesday. But a two-day win streak is hardly a proven stock market rally. Plus, Tuesday was Election Day, with plenty of uncertainty over election results and how investors would react.

It didn’t take long for Wall Street to decide. Even with the election results still somewhat cloudy, the major indexes and leading stocks surged powerfully on Wednesday.

The Dow Jones, S&P 500 index and Nasdaq composite all broke their recent downtrends Wednesday, while the latter two indexes closed convincingly above their 50-day lines. Xpeng stock and Alibaba rivals JD.com (JD) and Pinduoduo (PDD) were among the breakouts. Nvidia stock and many others flashed early entries by clearing their 50-day lines and breaking downtrends. 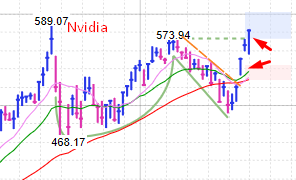 Wednesday’s big gains on higher volume qualified as a follow-through day for the Dow and S&P 500. Because the two indexes closed in the upper half of their daily ranges on Friday, Oct. 30, that qualified as a “pink rally day.” So On Thursday, the stock market rally showed no let up, with further sharp gains for the major indexes and leading stocks. Now the Nasdaq confirmed its rally attempt.

On Friday, the stock market rally fell back early, but slashed losses. The Nasdaq closed slightly higher. Many leading stocks were rushing higher even as the indexes were at session lows. A few more stocks such as Nvidia broke out while prior breakouts advanced or held up.

What’s Next For Market Rally?

The S&P 500 and Nasdaq are just below their October peaks and September all-time highs. Perhaps the stock market rally will rush past those levels. But they could serve as a resistance area for a time. That would let more leaders form handles or move into position.

A modest pullback would be fine. But the Dow or S&P 500 closing below the low of their Wednesday’s follow-through days would be a bad sign for the market rally.

With the election results coming into focus with Joe Biden’s apparent victory, some major uncertainty is lifting. But earnings will still be heavy for the next few weeks. Investors may pay more attention to skyrocketing coronavirus cases, with looming vaccine news offering possible hope or disappointment. Finally, “stimulus deal” headlines could once again swing the market rally.

This IBD Tool Simplifies The Search For Top Stocks

Do This Before Monday’s Stock Market Open

Hopefully, investors have built up exposure substantially. You want to take part in a newly confirmed stock market rally. A rally’s big winners often are among the first to break out. Also, the early stages of a rally often show real power, providing a chance to quickly build a cushion in new positions.

The number of top stocks flashing buy signals amid a strong, broad market rally highlighted the importance of scaling in rapidly.

Revamp your watchlists. Many stocks blew past buy points last week, while others like Nvidia, Alibaba and Google stock are in buy zones. Do your research now. Last week showed the importance of informed, decisive action.

Read The Big Picture every day to stay in sync with the market direction and leading stocks and sectors.

Warren Buffett Doubles Down On Major Reversal In Investing