STARTING Year One can be daunting but the excitement of mingling with new friends in the classroom, wearing a uniform and taking part in school activities usually cancels out the fear.

This year, however, children are stuck in front of computer screens and have not been able to experience such joy at school.

Among them was Thee Siang Ngee, seven, who wished he was at school with his new classmates.

“I was looking forward to starting school and making new friends. Now I have to study at home, ” he said when met at his home in Pulau Tikus, Penang.

“It would be nice to be in a classroom. I feel that I will be able to learn better if I can interact with others.”

Siang Ngee said while it was easy for him to follow online classes, they could sometimes be boring.

“We just stare at the screen and wait for instructions.

“As my mother is a teacher, she guides me whenever I need help.

“I enjoy science and was hoping to take part in science experiments in school.

“I also miss taking part in sports. I love running and other outdoor activities, ” he said.

Siang Ngee’s father Thee Teh Chin Hooi, 42, said he now had to check his son’s schoolwork as there was no teacher to check in person.

“He always needs help with art as there is no teacher here to guide him.

“I have two sons. My younger son is in kindergarten so sometimes, his lessons can get loud.

“When both their lessons clash, Siang Ngee will take his tablet to study somewhere else.

“I do feel bad for him as he was so excited to start school, ” he added. 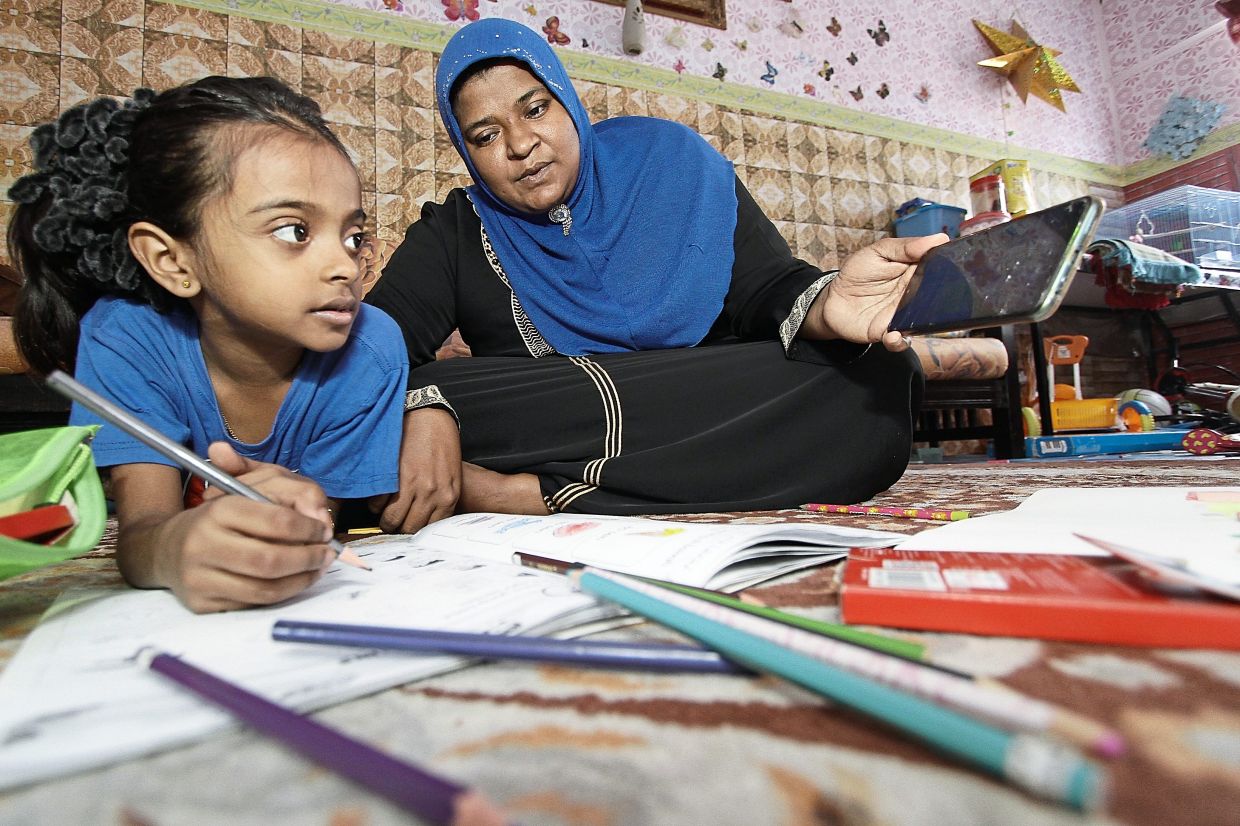 Mazurah guiding her daughter Nur Mashitah with her homework at their home in Taman Manggis.

Another parent in the same boat was housewife Mazurah Maula Mydin, 38, who said her daughter Nur Mashitah Ahmad Muzhafar, seven, had never stepped foot in a classroom.

“She just started Year One. Helping her with her work has been the hardest part.

“Her lessons are usually messages and links of videos that she has to follow.

“She shares my phone with her older siblings aged nine and 13.

“We cannot afford to buy computers or gadgets for each of them.

“I alternate among the three of them every day by giving them a few hours of screen time based on their schedule.

“Their teachers are understanding and will usually tell me that I can submit their homework later in the day, ” said the mother of four.

Mazurah said it was difficult for Nur Mashitah to enjoy school as she had never met her teachers.

“To date, we have not seen any of her teachers or interacted with anyone in her class.

“I hope that things go back to normal soon and schools will reopen so that children can have a proper education, ” said Mazurah.

Consumers Association of Penang education officer N.V. Subbarow said he had spoken to several parents and teachers about the trials of helping Year One pupils transition from kindergarten to school while studying at home.

“The children are having a tough time. They need to go to school.

“In school, there will be other pupils and teachers to instil a sense of discipline and competitiveness.

“Now at home, children tend to lose interest and wander off during lessons, ” he said.

Subbarow said the first year of school was critical and pupils needed to be exposed to a proper strict environment.

“Parents have to play a double role now but working parents have no time to guide their children and grandparents do not understand the syllabus, ” he said.