THE rise in youth suicide is an alarming trend.

Tragic reports of a teenage girl who committed suicide – after her social media followers voted “yes’’ in a poll where she asked if she should take her own life – shocked the nation in 2019. 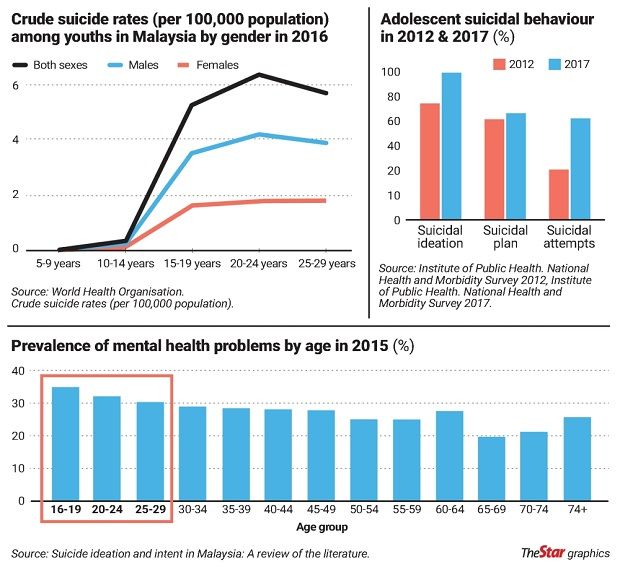 Sadly, two years on, the “Youth Suicide in Malaysia” report by Relate Mental Health Malaysia (Relate) founder Dr Chua Sook Ning and Institute for Democracy and Economic Affairs (Ideas) senior executive Vaisnavi Rao found that the situation has only gotten worse.Published on Feb 19, the report highlighted the status of youth suicide in Malaysia and recommended policies for its prevention.

It also examined the impact of the Covid-19 pandemic on suicide rates, the law and prevalence of suicide, suicidal behaviour among youths, risk factors, causes of youth suicide, and challenges of suicide prevention in Malaysia.

“Anyone can experience poor mental health. Chua and I have gone through the recovery journey and we are here to show that people can continue to live fulfilling, meaningful and productive lives even with these experiences.

“Unfortunately, the stigma of mental illness and suicide attempts is a barrier for many to live their lives to their fullest potential, ” Rao told StarEdu.

The decriminalisation of attempted suicide, Chua said, is an important step but it is only one of many that must be taken to decrease these preventable deaths among youths.

Suicide, she said, is a complex and rising public health issue that needs to be addressed practically.

“This is especially with the rise in socioeconomic stressors affecting the mental health of our population in this day and age.”

In their report, Rao and Chua outlined nine policy recommendations (refer to the table) for youth suicide prevention.

They suggested starting with three: more funding and resources allocated to the development and maintenance of a surveillance system to monitor suicide and suicide attempts; responsible media reporting of suicide; and effective public awareness campaigns to raise awareness, encourage help-seeking and reduce the stigma associated with seeking help for suicidal ideation.

The information available online is scarce, both on the prevalence of suicide among youths as well as existing programmes for suicide prevention, Rao noted.

“The national suicide registry needs to be revived to consolidate suicide data and improve our understanding of the risk factors and suicide trends in the country.

“This ensures that interventions are targeted at the specific needs of the population, ” she said, adding that the data needs to be accessible and transparent to allow for better research and advocacy to improve prevention strategies.

Chua said it is important to be mindful of the stigma of suicide.

“We wanted to convey the facts in a manner that is informative and respectful, knowing that there is a real stigma that suicide loss survivors and people with lived experiences of suicidal thoughts and suicide attempts have to face.

“When we talk about the prevalence of suicide, we aren’t talking about abstract figures but people’s lives, ” she said.

Malaysian Mental Health Association president and consultant psychiatrist Prof Datuk Dr Andrew Mohanraj, who was part of the panel that assessed the report, said its publication is timely as it calls for decriminialising attempted suicide.

“This is important because only then distressed people contemplating suicide or those with unsuccessful attempts will be encouraged to seek help and prevent unnecessary loss of precious lives, ” he said. 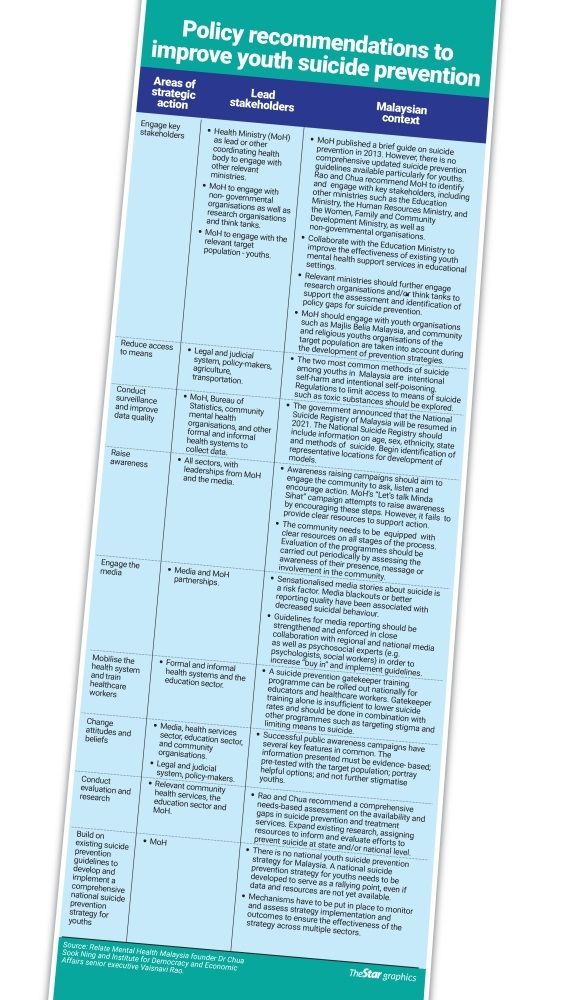 “The lack of resources will be a huge challenge in moving the needle in suicide prevention and implementing the recommendations outlined in our report.“It is difficult to have a constructive discussion on the stigma associated with suicide while it remains a crime in our country, ” said Rao.

She said a rehabilitative approach will be a major step towards encouraging more open and empathetic conversations about suicide in the community, workplace, and school settings.

The stigma and stereotypes associated with suicide are another barrier, Chua added.

“People react with prejudice, fear, distrust, anger and discrimination against those who have attempted suicide by avoiding them and treating them with disdain and disrespect.

“It is unfortunate that even healthcare providers have such attitudes and behaviours.”