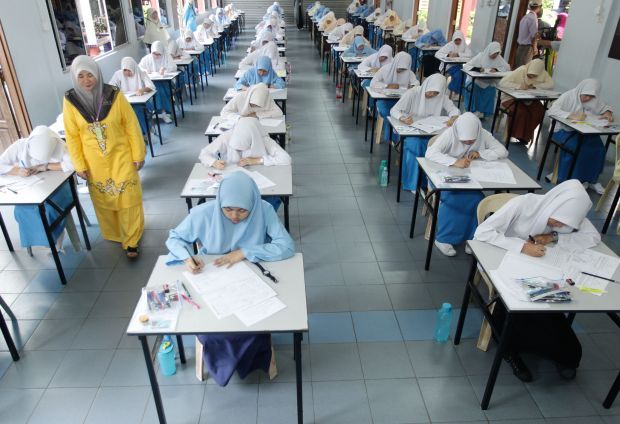 PETALING JAYA: Students sitting for major exams like the Sijil Tinggi Persekolahan Malaysia (STPM) should be allowed back in school, parents say.

But while parents worry that the recently announced deferment would result in ineffective online revision, students are treating it as extra time to prepare.

She said schools should continue to open for Form Five and Six students to attend physical classes as there are still many challenges to online learning.

“A domino effect will surely impact learning as concepts need to be learnt and understood to a high degree and then applied to solving complex problems and situations, ” she said.

She added that students who are preparing for STPM should have been allowed to return to their respective schools for physical classes to resume.

“We need to learn to overcome the challenges and learn to live in this new normal rather than run away from it. Allow parents to decide to return their children who are sitting for SPM or STPM to school, ” said Azimah.

On Sunday, the ministry announced that the Semesters 1 and 3 of the STPM have been postponed to March and April next year.In April, it said Semester 3 of the examinations would be postponed to the first quarter of 2021 while the second semester was held in August this year.

Earlier in March, it was announced that the Semester 2 and 3 examinations, which was initially scheduled for early May, would be held this month instead.

Kolej Tingkatan Enam Tun Fatimah’s Parent-Teacher Association chairman Mak Chee Kin said some STPM students and their parents were frustrated at the sudden closure of schools and the deferment of exams again.

Mak, who is also the Melaka Action Group for Parents in Education (Magpie) chairman, said the ministry could have allowed exam classes to continue while other students who did not have to sit for major exams continue their lessons from home.

A veteran teacher from Melaka, Jane, said the deferment gave more time for the weaker students to catch up.

“Although I know some students are unhappy about the decision and had hoped to get it over with quickly, extra time means extra opportunities to give their all in the exams.

“They know their responsibilities and they want to succeed. Self-driven and self-directed children are good even with their tight online learning schedule. Besides, they are constantly being monitored, ” she said.

A Form Six art stream student who declined to be named said he chose not to let the delay affect him by staying positive.

“I was calm when I heard about the postponement because I expected it to happen, ” he said.

“There is nothing we can do about it. What we can do is always be prepared for any changes.”

Though frustrated at first, another student Harolyn, said she realised that the postponement was a blessing in disguise as it provided more time for revision.

“I was thinking about the longer time needed for me to graduate and enter university, but I suddenly felt happy and calm as I still have plenty of time for myself to do my revision for the exams in March.

“I feel at ease as I no longer have to push myself to study a lot in a day. For example, I can study two chapters a day, ” said the art stream student.

Another student from Melaka said he would be getting more time to learn from home in a more peaceful and quiet environment.

“I view the deferment as a gift. Of course, I was worried that I needed more time to get into university as compared to my other friends who have already started their first year in private universities.

“But thanks to the delay, I now get more time to study and do my assignments. Since this is not my first experience in online learning, everything is fine, ” said the student who aspires to be a lawyer.

The National Union of the Teaching Profession (NUTP) agreed with the ministry’s decision to postpone the STPM because “safety is most important”.

Its secretary-general Harry Tan, however, expects students to be stressed “just like any other Malaysian” with the ongoing conditional movement control order.

“How they manage their stress depends on the help that they get from their teachers, peers and parents, ” he said.

Walmart Canada plans to give 85,000 employees a one-time COVID-19 bonus