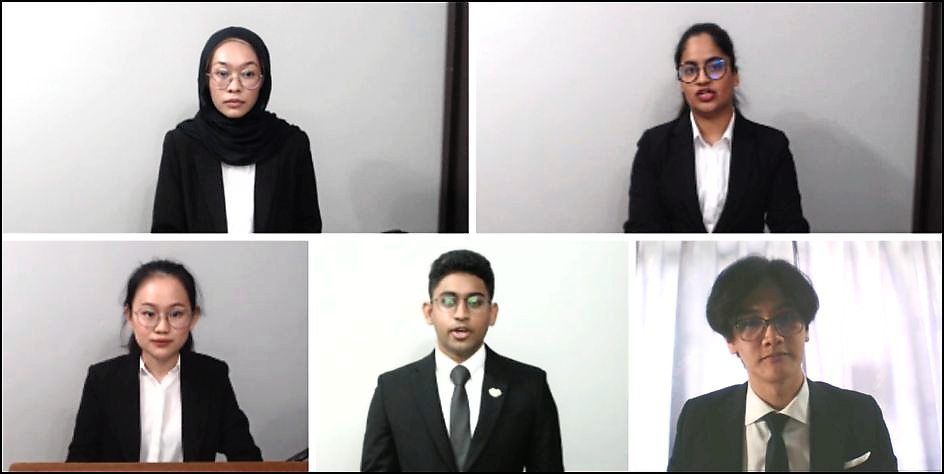 UNIVERSITI Malaya (UM) law students basked in the glory of being crowned champions at the Asia Pacific Regional Rounds of the world’s oldest and largest international moot competition.

The team, comprising five undergraduates from UM’s law faculty, emerged victorious after beating their National University of Singapore (NUS) counterparts in the Championship Round. The win was a culmination of an unbeaten run that saw them coming out tops in all four matches in the preliminary rounds, quarter-final, and semi-final at the regional rounds of the Philip C. Jessup International Law Moot Court Competition, also known as the Jessup Moot.Among their opponents included students from New Zealand’s University of Auckland, and Indonesia’s Padjadjaran University, and Gadjah Mada University.Making up the team are Ameerah Nasri, Nevyn Vinosh, Peh Qi Hui, Saradha Lakshmi, and Chew Thean Ern, who are all first-time Jessup Moot participants.Following the win, the students will be proceeding to the Jessup Global Rounds, which will be held from this month to April.

Saradha said the team is immensely grateful for the support shown by UM Law Faculty dean Assoc Prof Datuk Dr Johan S. Sabaruddin, trainers, and faculty and varsity members.“Our victory is possible only with their continuous support and trust in us, ” she said.

This year’s Jessup Moot edition is conducted online due to the Covid-19 pandemic. In addition, all teams from the regional rounds will go on to participate directly in the global rounds without going through the traditional qualifiers at the national stage.

Nevyn said their win at the regional level has shown that they are able to overcome the restrictions on physical proximity and grouping in mooting facilities.

“The true test lies in the global rounds. With one confidence-boosting milestone attained, Team UM is well on course to chase even more glory in the coming weeks, ” he said.UM had played host to the Asia Pacific Regional Rounds from Feb 24 to 28.

At the Jessup Moot, held annually since 1960, law students take part in a simulation of a fictional dispute between countries before the International Court of Justice, the judicial organ of the United Nations.

Every year, it draws the participation of 700 law schools from more than 90 countries, with a diverse lineup of experienced judges from across the globe.