WITH the expansion of rail networking and education opportunities, it is timely for Universiti Tunku Abdul Rahman (UTAR) to promote interdisciplinary research in railway infrastructure, engineering, socio-economics, education, training and services. 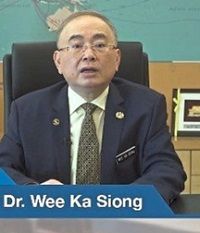 The government’s expansion of the rail network throughout the country is a testament to its commitment to becoming a developed nation, he added.

The 51km track runs through 31 stations serving a population of 1.2 million people in the region, Dr Wee said.

“Realising the importance of a rail network especially in the Greater KL area, the government has further allocated funds for the construction of the second MRT line which is under construction with a distance of 52km and an expected ridership of 529,000 commuters per day.

“Another example of the government’s commitment on expanding the rail network in the country is the construction of the East Coast Rail Link (ECRL) with a distance of 664km.

“This will potentially alter key international trade routes in the process, ” he said, noting that the corridor is in-line with China’s Belt and Road ambition of connecting the Middle East and Europe by sea routes.

It is estimated that the ECRL will transport around 5.4 million passengers and carry 53 million tonnes of cargo annually by 2030, with a transportation ratio of 30% passengers and 70% cargo.

The spinoff of rail network expansion into education is expected to carry the same momentum, Dr Wee said in a press release.

He was speaking during the opening of the Second Symposium on Railway Infrastructure and Engineering on Feb 3.

The online symposium on railway infrastructure and engineering was a follow-up on the successful inaugural symposium held in January 2018 in conjunction with the setting up of the CRIE.

The symposium aimed to bring together practitioners from railway industries, owners, operators, researchers and academia in its sharing of research outcomes and knowledge, while promoting research activities to support the new initiatives in expanding the rail network in Malaysia and promoting railway connectivity within the Asean region. The symposium saw the attendance of 900 local and international participants.

UTAR president Prof Dr Ewe Hong Tat said educational institutions and the industry play a great role in the training of graduates with the relevant knowledge and expertise to support the growth in the nation’s rail industry.

“UTAR has taken steps to ensure that our graduates are given the relevant training, in addition to industry exposure, for an all-round education.

“We have also introduced an elective on Introduction to Railway Engineering and System Management in our engineering degree curriculum and a new short course on Railway Electrification System to enhance our engineering graduates’ interests and employment in the rail industry, ” he added.

“Among our research projects are the development of a composite rubber concrete railway sleeper, and vibration mitigation using local rubber products to ensure the integrating safety of railway infrastructure and system, ” he said, adding that these are initial projects which will help the country support and utilise its natural resources for sustainability.

“We have also started our discussion on the development of rail site condition monitoring and prediction of failure with our local train operator Prasarana. This is another project that CRIE will be embarking on in support of local expertise and resources, ” he said.

The symposium offered participants a platform to exchange ideas and opportunities in the areas of railway infrastructure, safety and standards, operation safety, reliability and maintainability; social, environment and economic issues, education and training, as well as transportation and optimisation of traffic control.

The other seven speakers comprised local and international specialists, researchers, academics and the industry players.